San Juan Bridge: Contrary to popular belief that prevailed for over a century, the first shot of the Philippine-American War was not fired on this bridge but on Sociego Street in Santa Mesa district, Manila. The Philippines' National Historical Institute (NHI) recognized this fact through Board Resolution 7 Series of 2003. On Feb. 4, 2004 the marker on the bridge was removed and transferred to a site at the corner of Sociego and Silencio streets. 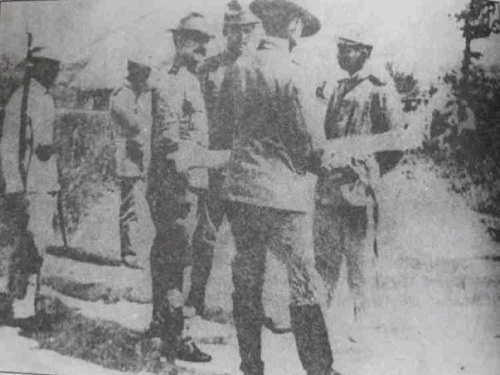 Pvt. William W. Grayson (1876-1941):  The Englishman who fired the shot that ignited the Philippine-American War; he was born in England to parents William and Sarah Grayson. The family immigrated to Nebraska where young Grayson worked as a hostler. He enlisted in the 1st Nebraska on May 10, 1898. The regiment returned to the US from the Philippines on Aug. 1, 1899, mustered out, and Grayson settled in San Francisco, California. He married Clara Francesca Peters on Oct. 10, 1899, became a US citizen in December 1900, and had one child, Marguerite, born in 1909. He worked as a house painter or an undertaker; ill health forced his retirement in 1920. He died in the San Francisco Veterans Administration Hospital on March 20, 1941. Corner of Sociego and Silencio streets, Santa Mesa District, Manila. The National Historical Institute placed two plaques (in English and in Filipino) marking this spot as the scene of the first shot that sparked the Philippine-American War. The plaque in English states: "Here at 9:00 in the evening of February 4th, 1899, Private William Grayson of the First Nebraska Volunteers fired the shot that started the Filipino-American War. 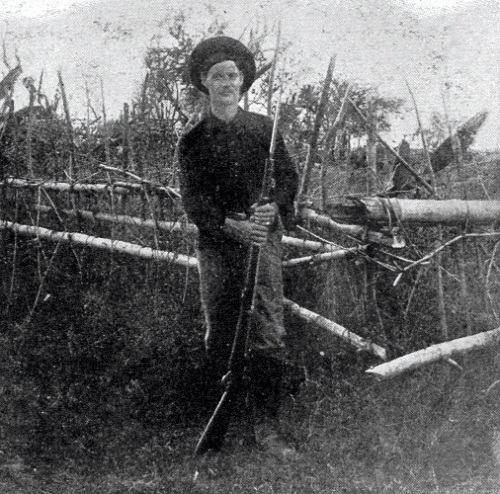 Pvt. William W. Grayson, standing on the spot where he fired the shot that started the Philippine-American War. 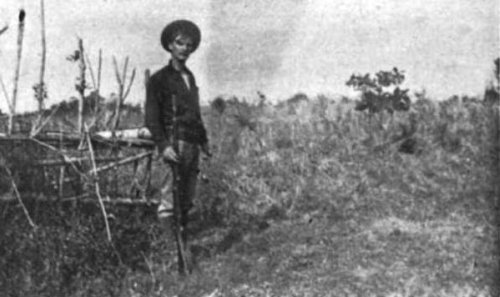 Pvt. William W. Grayson, standing on the spot where he fired the shot that started the Philippine-American War.

Grayson said: "About eight o'clock, Miller and I were cautiously pacing our district. We came to a fence and were trying to see what the Filipinos were up to. Suddenly, near at hand, on our left, there was a low but unmistakable Filipino outpost signal whistle. It was immediately answered by a similar whistle about twenty-five yards to the right. Then a red lantern flashed a signal from blockhouse number 7. We had never seen such a sign used before. In a moment, something rose up slowly in front of us. It was a Filipino. I yelled 'Halt!' and made it pretty loud, for I was accustomed to challenging the officer of the guard in approved military style. I challenged him with another loud 'halt!' Then he shouted 'halto!' to me. Well, I thought the best thing to do was to shoot him. He dropped. If I didn't kill him, I guess he died of fright.

"Two Filipinos sprang out of the gateway about 15 feet from us. I called 'halt!' and Miller fired and dropped one. I saw that another was left. Well, I think I got my second Filipino that time...."  [LEFT, front-page report in the Freedom, Feb. 16, 1899, published in Manila by the US Army].

The name of the first Filipino fatality of the war was Corporal Anastacio Felix of the 4th Company, Morong Battalion under Captain Serapio Narvaez. The battalion commander was Col. Luciano San Miguel. 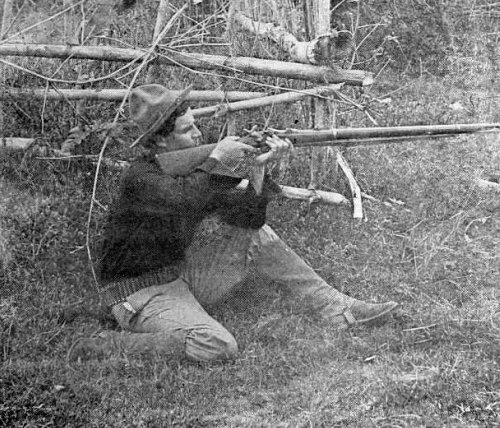 Pvt. William W. Grayson:  Photo was taken near Blockhouse No. 7 on the spot where he fired the first shot.

As they ran back to their post, Grayson shouted, "Line up fellows, the niggers are in here all through these yards."

Pvt. William W. Grayson in firing position on the spot where he fired the first shot of the Fil-Am War.

Filipino troops at San Juan del Monte exchanged fire with the American line at Sta. Mesa. The companies of the Morong Battalion under Captain Narvaez and Captain Vicente Ramos charged the American positions and pushed back Graysons unit and even captured an American artillery piece. "By at night," said American historian James LeRoy "the American troops were engaged for two miles from river north and west." 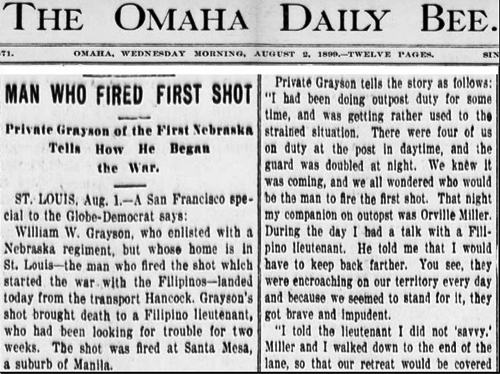 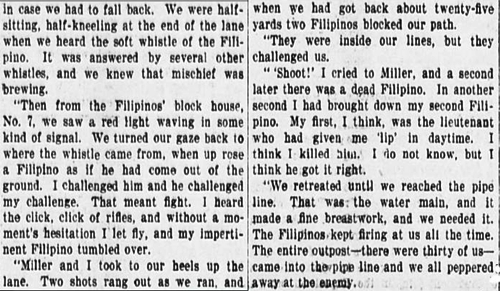 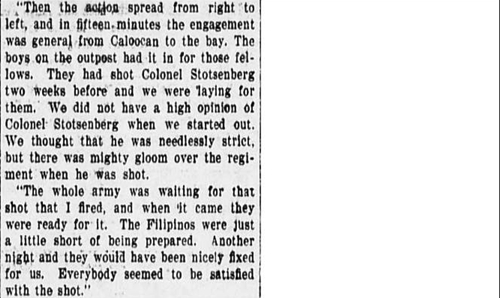 Many of the Filipino commanders were on weekend furlough.  General Antonio Luna, commanding general of the Philippine Army, visited his family in San Fernando, Pampanga Province. Gen. Mariano Noriel was in Parañaque making preparations for his wedding. General Artemio Ricarte and Col. Luciano San Miguel, commanding officers of the troops in San Juan and Santa Mesa, were at Malolos meeting with Pres. Emilio Aguinaldo. They stayed the night in Malolos, at the house of Tomas Guison.

Many others were similarly indisposed. The Filipino soldiers were for the most part leaderless.

General Pantaleon Garcia (LEFT) was the only one who was at his post in Maypajo, north of Manila (he was captured by the Americans in Jaen, Nueva Ecija Province on May  6, 1900).

On the American side that same night, Maj. Gen. Elwell Otis and Brig. Gen. Robert Hughes were playing billiards, Maj. Gen. Arthur MacArthur, Jr., and his staff were playing cards and most senior officers were absent from their commands; the officers of the 1st Colorado Volunteers were in dress whites playing whist.

Near Intramuros, several hundred 1st California Volunteers and civilians were enjoying themselves at a circus. When firing commenced and the alarm spread, an excitable orderly rushed in and between gasps howled the soldiers to quarters. The men rushed over the flimsy structures through the rings, the civilians followed suit, and clowns and trained horses were forgotten in the general rush to the doors. A number of officers were present who attempted to restore order, but the delay cost them their carriages; for when they reached the street they found their horses had been taken by soldiers in their anxiety to get to barracks.

The strength of the US Eight Army Corps as of February 4 was 20,851 (819 commis- sioned officers and 20,032 enlisted men).  Out of this number, 2,415 officers and enlisted men were assigned in Cavite and Iloilo harbor.

After subtracting further the sick, those serving in the civil departments and those belonging strictly to and doing duty in the staff organizations, the effective combat strength of the Corps in Manila was about 14,000.