The American newspapers published in Manila (the first, The American Soldier, began circulating on Sept. 16, 1898) had a common point of view:  "These islands are rich untapped sources of American wealth and capital. The natives, half-devil and half-child, insist on playing government: a group of warlike tribes who will devour each other the moment American troops leave." 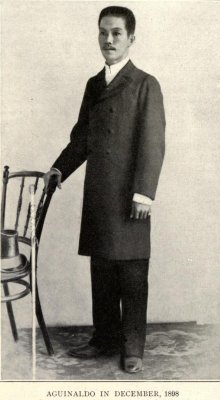 On Jan. 23, 1899, the First Philippine Republic, popularly known as the Malolos Republic, was inaugurated amidst colorful ceremonies at the Barasoain Church, Malolos, Bulacan Province. This was also the first republic in Asia. Aguinaldo took his oath of office as President of the Republic. He stated the aspiration of the nation "to live under the democratic regime of the Philippine Republic, free from the yoke of any foreign domination." In conclusion, he declared: "Great is this day, glorious this date, and forever memorable this moment in which our beloved people are raised to the apotheosis of Independence."

To make the event more memorable, Aguinaldo issued a decree granting pardon to all Spanish prisoners of war who were not members of the Spanish regular army and at the same time, granting to Spaniards and other aliens the right to engage in business within the limits of the Republic.

The food at the inaugural banquet was European and the menu written in French. 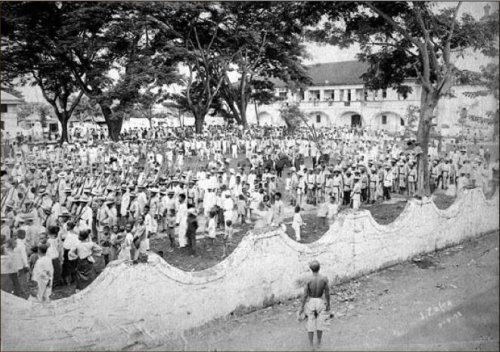 Philippine army soldiers at the plaza in Malolos 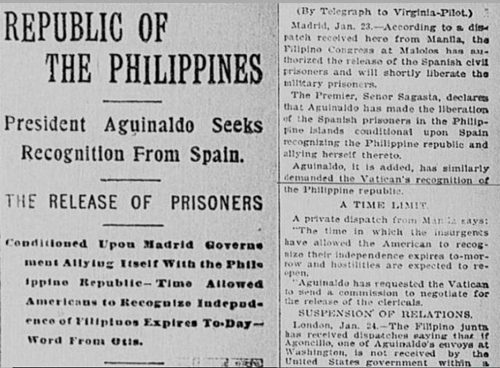 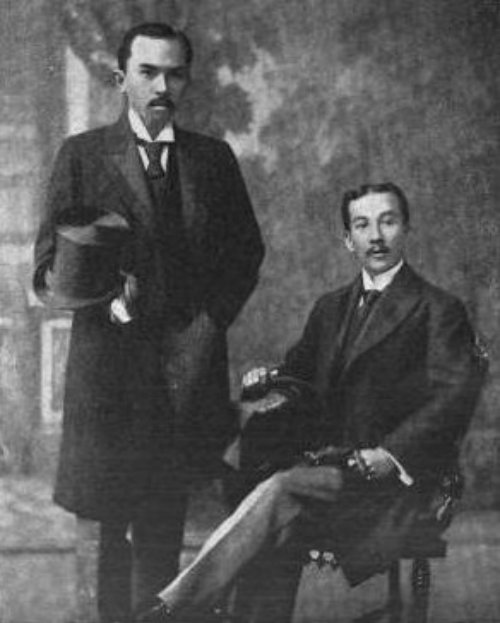 Jose "Sixto" Lopez (LEFT) and Felipe Agoncillo (RIGHT), Philippine ambassadors to the United States. Agoncillo was commissioned as Minister Plenipotentiary to negotiate treaties with foreign governments. PHOTO was taken in 1898.

Meanwhile, in the United States, Ambassador Felipe Agoncillo appealed to the U.S. Senate where the Philippine question was being debated. 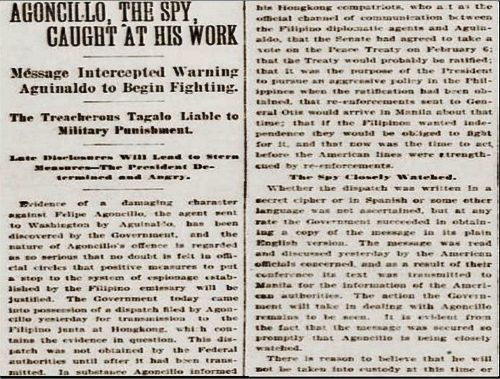 Agoncillo wrote a memorial addressed to the US Senators on January 30, reminding them to follow the precedents of their own country of recognizing the right of all nations to be free and to create and reform their own political institutions. 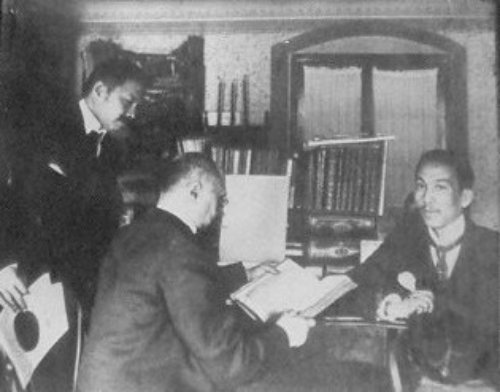 Juan Luna (LEFT), the Filipino painter, and Felipe Agoncillo (RIGHT) visiting Ferdinand Blumentritt, the Austrian teacher, historian, and ethnologist and close friend of the Philippine national hero Jose Rizal, at Litomerice, Austria-Hungary, in 1899. [Litomerice is now a part of the Czech Republic].

[When the Philippine-American War broke out on Feb. 4, 1899, which affected the decision of the US Senate to ratify the Paris peace treaty that ceded the Philippines to the Americans, Agoncillo moved to Canada. From there, he sailed to London, where he resumed his diplomatic activities and continued bringing into public knowledge about the newly born Filipino nation in the Far East that was struggling from American domination. When his funds ran out, he sold his wife's jewelry and resumed his work.] Capitol of the First Philippine Republic at Malolos. Photo taken in 1899. A bank note issued by the First Philippine Republic on April 21, 1899. The symbol used for the Peso was the same as for the US dollar. 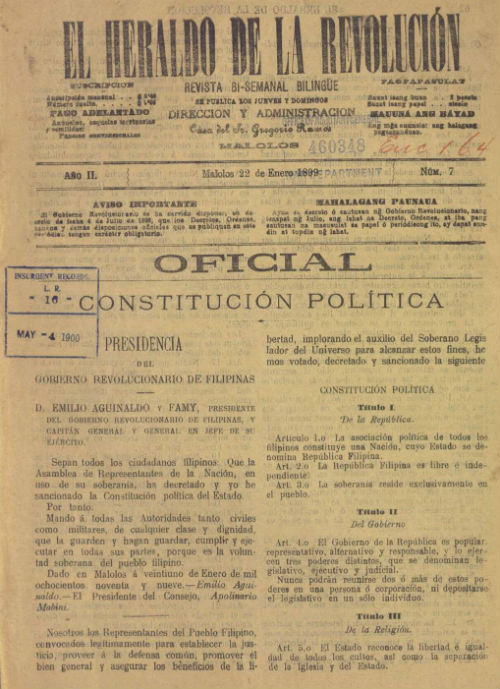 Issue dated Jan. 22, 1899. The Voice of the Philippine Revolution (1899). In the wake of Commo. George Dewey's destruction of Spain's Pacific Fleet in Manila Bay on May 1, 1898, Emilio Aguinaldo declared the independence of the Philippines on June 12, 1898. El Heraldo de la Revolución began semiweekly publication in September, continuing until fighting broke out between the Americans and Filipino forces on February 4, 1899 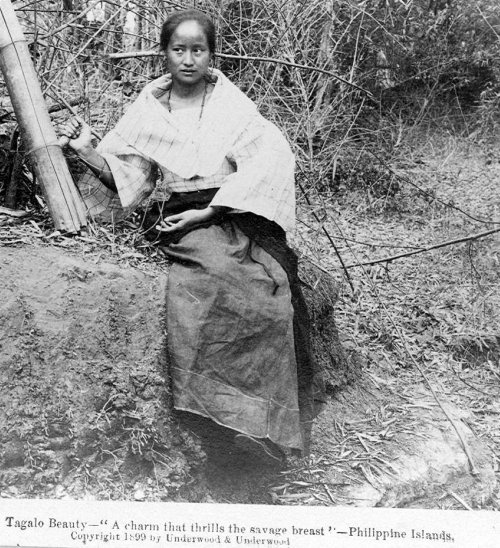 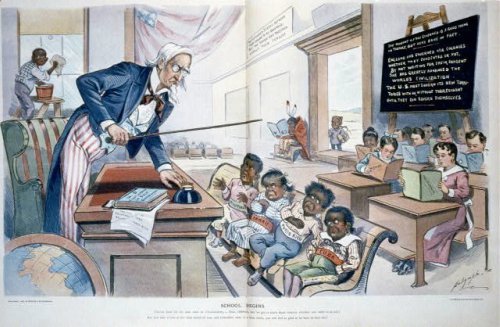 Caricature showing Uncle Sam lecturing four children labelled Philippines (who appears similar to Philippine leader Emilio Aguinaldo), Hawaii, Porto Rico and Cuba in front of children holding books labelled with various U.S. states. In the background are an American Indian holding a book upside down, a Chinese boy at door, and a black boy cleaning a window. Originally published on p. 8-9 of the January 25, 1899 issue of Puck magazine.

Caption: "School Begins. Uncle Sam (to his new class in Civilization): Now, children, you've got to learn these lessons whether you want to or not! But just take a look at the class ahead of you, and remember that, in a little while, you will feel as glad to be here as they are!"

Blackboard: The consent of the governed is a good thing in theory, but very rare in fact.  England has governed her colonies whether they consented or not. By not waiting for their consent she has greatly advanced the world's civilization.  The U.S. must govern its new territories with or without their consent until they can govern themselves.

Poster: The Confederated States refused their consent to be governed, but the Union was preserved without their consent. 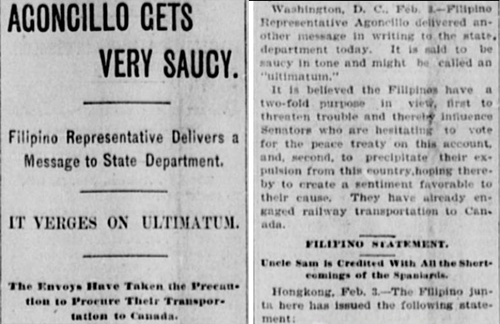 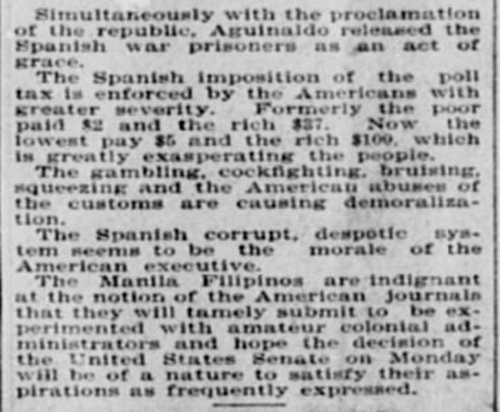